In general, mini-pigs that interact with and receive positive feedback from humans during the first two months of life are social and enjoy being with people. They prefer to seek physical contact with people rather than to receive it, and they are more trusting of people who are squatting rather than standing. They do not like to be restrained and will struggle and scream loudly when restraint is attempted. They often shy away from strangers and from people wearing hats or gloves, and they typically express their moods – whether they are happy, angry, or aggressive - by wagging their tails. 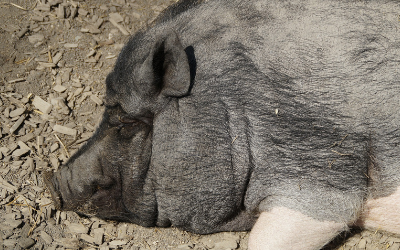 Pigs housed with other pigs usually establish a social hierarchy, with some being dominant and others submissive. Hierarchy in the social structure is generally related to body size and growth rate; gender is a less important factor, with some females (sows) acting more aggressive than males (boars). Fighting amongst pigs housed together is not uncommon, especially if they are overcrowded or fed together.

Like people, they typically have a daily routine. Mini-pigs’ daily routine involves eating, drinking, eliminating, socializing, sleeping, and digging. They are generally more active in the morning and evening and often sleep during the day. Indoor pigs sleep about 50% of the time. Especially during hot weather, pigs tend to be less active during the day and more active at night.

What kind of toys can I provide for my pig?

Pigs are very intelligent and need environmental enrichment, or they can become bored and destructive. Pigs generally prefer heavy, durable objects to push around such as tires, cement blocks, large rocks, bales of hay, large piles of straw, and iron chains. They also like soft, chewy items such as leather and hemp rope. Despite their name, they prefer to play with clean objects over dirty ones. They love foraging for food within toys; a bowling ball stuffed with pig chow makes a great toy for a pet pig.

"Pigs are very intelligent and need environmental enrichment, or they can become bored and destructive."

Painted objects that are coated with potentially toxic chemicals, as well as items made from fabric, wood, plastic, soft rubber, or string, should be avoided, as they can be easily ingested and cause gastrointestinal obstruction.

Pet pigs that are not provided with appropriate environmental enrichment or are not socialized early in life may develop stereotypical behaviors including pacing, staring, excessive drinking, hitting walls, drooling, rubbing on things excessively, and repeated licking of or chewing on objects, especially metal and rope. These behaviors may be eliminated by providing proper environmental stimulation, including foraging toys, and by providing additional food.

Rooting is the natural behavior all pigs perform of digging in soil and chewing on grass. Ideally, pigs should be allowed to root outside in untreated lawn. If they are not allowed access to an area for rooting, they may dig up floors, carpeting, or walls in your home, and chew up house plants.

"Rooting is the natural behavior all pigs perform of digging in soil and chewing on grass. Ideally, pigs should be allowed to root outside in untreated lawn."

Pigs housed in apartments without access to safe outside space can be offered a small, heavy plastic, kiddie wading pool with the side cut out for a doorway, filled with rocks and shredded paper in which they can safely dig. Offering pigs hay or feeding them outside may reduce their desire to root, but most will continue to perform this behavior.

What can cause aggressive behavior in pet pigs?

In addition to inter-pig aggression due to social hierarchy in multi-pig households, pet pigs can suddenly become aggressive in response to changes within a household. Changes could include a change in caretaker schedule, introduction of new pets and people, and discomfort from illness. Pigs may become aggressive to particular people, to all men, all women, or all children, and they may try to attack even if unprovoked. If your pig displays this type of behavior, seek out the help of a pig-savvy veterinarian immediately.

© Copyright 2020 LifeLearn Inc. Used and/or modified with permission under license.