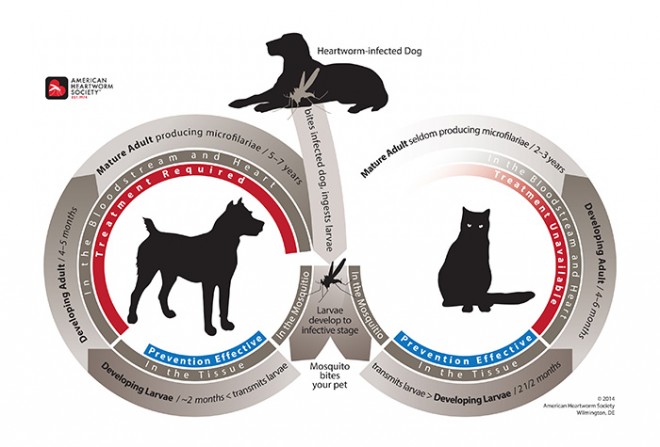 YEAH it’s spring, but spring brings lots of bugs! The main concerns for our fluffy family members are mosquitoes, ticks and fleas.

Heartworm is a serious and potentially deadly disease that is passed to dogs from a single mosquito bite. Annual testing helps to ensure that pets are treated early before the disease has progressed, which can cause irreversible damage to the internal organs.

Certain ticks carry Lyme Disease and this is one of the most commonly reported vector-borne zoonosis. With positives in our hospital alone last year we know that ticks and Lyme disease is a concern where we live. Is your dog at risk?

Flea bites are mainly harmless and the main complaint is severe itchiness but can be a huge downfall to the human pet bond. Fleas are insects that feed off dog and cat blood but will turn to a human host if needed.
The life-cycle of a flea has four stages:

If you do have a flea-infestation, it is important to treat the pet’s environment as well, to eliminate flea eggs and larvae. Prescription products such as Revolution can treat your pet and home during an infestation and be used monthly as a preventive.